What is a CNC Router?

CNC Router! A machine that is nothing less than a godsend blessing.

For people who work in woodworking, the industrial CNC router is an immense help. It reduces their hours of intense labor with its computer-controlled rapid cutting. Whether it is a cabinetry manufacturing unit or the one that produces desktops, a CNC router can cut any and every material with accurate dimensions. Not just that, it can cut the decorative carvings equally well.

At the advent of the century, the following scenario was beyond imagination.

One end of the manufacturing unit has slide-in sheets of plywood, while the well-cut cabinetries and furniture emerge from the other end.

But the emergence of the CNC router made it all possible. Controlled by a designing program, CNC router not only cut various materials for clean and smooth finishing but also chop them for joinery cuts, holes, and pilots. 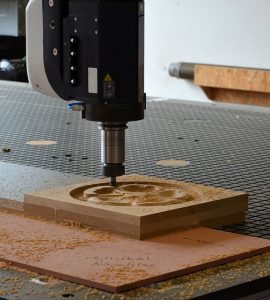 But what is a CNC Router? Here’s an answer to the question.

CNC Router is an abbreviated term for Computer Numerical Control (CNC) Router. It is a computer-controlled cutting machine. The hand-held router used for cutting at woodworking is mounted on the machine as a spindle. Besides cutting materials like wood, steel, aluminum, glass, plastic, etc. the CNC router is known to perform a lot many functions of carpentry. The carpentry stores can also use a CNC router as a substitute for carpentry machines including a panel saw boring machine and the spindle molder.

Due to its similar functioning, folks often confuse themselves between CNC routers and CNC milling machines. They even end up using them interchangeably. But the two are quite different in their mechanism. Keep reading to know about the difference between a CNC router and a CNC milling machine.

Although both the machines mentioned above are computer-controlled, a significant difference can be seen in their functioning and mechanism. Here’s how the two are different from each other.

The key difference lies in their configuration. While the CNC Router moves the spindle (router) around the object that is being cut (stationary object), CNC Milling Machine remains stationary and lets the object (workpiece) move along the linear axis. The CNC milling machine thus tends to cut workpieces with more accuracy and precision. It is, however, slower than the CNC Router.

How does a CNC Router Work?

As mentioned above, the CNC router runs on pre-programmed commands. Hence, it is computer-controlled. The entire working of CNC router can be summed up in the following three steps: