A Brief History of Drawer Construction

Throughout life, people tend to accumulate many different items. With this accumulation of things, there comes a need to organize said items. Whether it be in your room, by your bed, in your office, or even your closet, almost everyone has a drawer in their place of residence.

Drawers have been a staple of house furnishing and organization for centuries already, though not everyone knows how they came to be. As far as most people are concerned, they were just always there in their lives. To this day, drawers have seen minimal changes in their overall design, but they have seen numerous improvements.

Modern-day drawers can be traced back to their early ancestors, which were chests. To understand how far they have come, it is essential first to understand where they came originated. 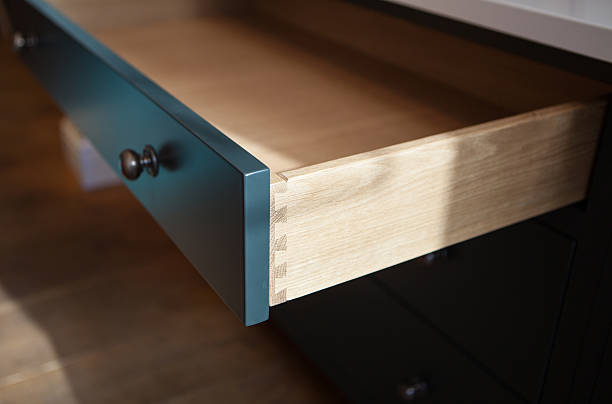 Drawers often come in pairs and are rarely ever alone. These are called a “chest-of-drawers” which simply means a collection of drawers fitted into a single frame. While chest’ is in the name, its resemblance to the chests of old are just a coincidence. Nevertheless, it is from chests where it originated from.

In the 16th century, people began placing tiny compartments within their chests which were plentiful at the time. They placed small tills and boxes and enclosed them inside of the chest’s body. It did not take them long to begin placing large tills in the entire lower portion of these containers. At the time, however, these tills were still thought of as separate boxes from the container as they were detachable and simply enclosed within by a small door.

The popularity of these containers with separate compartments continued to grow throughout the 16th century until chests were predominantly filled with these tills. It, however, still had the lid at the top which opened into a compartment for storing items. It was not until the 17th century where this was abandoned and any similarity to a chest was lost.

From the 17th century onwards, chests-of-drawers saw much evolution and improvement. This birthed an array of different types that suit different purposes and fulfill different needs. Depending on the intended use and the intended area, these containers saw changes to allow them to fit anywhere.

The most famous types of this furniture are the lowboys, highboys, and tallboys. These are chests-of-drawers of varying heights that serve various purposes. The suffix boys’ in this actually comes from the word bois, which means wood in french – though these are not strictly restricted to being made of wood.

As you can suspect, the heights of these drawer types are in the name. Lowboys are containers with rows of tills placed on a stand that is about the height of a table or desk. Highboys are simply taller versions of this. Tallboys, however, are even grander and taller than the other two variations. Tallboys can also deviate from the simple chest-on-chest design of the other types.

How they are made

There are multiple drawer joints, though not all of them are equal in strength and utility. The one that is often considered the best and most substantial is the dovetail joint. There are two types of dovetails; classic English and blind French variations. The classic English is visible from the side of the container while the blind French is not.

What makes the dovetail so strong is that the joint gets tighter when pulling pressure is applied. It is due to the male part of the joint being fitted in a way that is not parallel and thus allowing it to get tighter under pressure. Because of this, the dovetail joint has been the favorite of cabinet makers for centuries. It provides the strongest bond, which translates to high-quality furniture.

While dovetail joints are the most popular choice for cabinetmakers, it is not the only way to construct. Numerous other joints have risen to prominence over the years as well. Each one has its distinct benefits that make its case used in place of the dovetail.

The nailed rabbet is a technique that survived from its origin in the 17th century. It held out for so long due to its ease of producing, which, in turn, makes it low cost. It finds its best use in low-bearing and inexpensive furniture as a result. Just because it is cheap to make does not mean that it is low quality. Because of modern technology, the nailed rabbet can still make good-quality products when appropriately paired.

The finger joint is another hinge that saw much use over the years but eventually phased out of production. In the 19th century, most furniture production shifted towards machines and factories. The finger joint was birthed in this era as low cost and easy to assemble. However, the main problem with this type of hinge was that it was weak and unable to withstand heavy loads. Because of this, its use dwindled over the years and is now only used in small furniture like jewelry boxes.

The last popular construction method goes by many names. It is sometimes called the “scallop and peg” or the “scallop and dowel.” Its real name, however, is the Knapp joint named after its inventor. The Knapp’s joint takes advantage of everything that machinery has to offer. It means that it is created through the machine that follows a design made by its inventor. Production of joints by the Knapp machine was far faster and cheaper than it would take by hand. The reason this joint did not take off was due to cultural reasons.

The art of furniture

Furniture making nowadays ranges from very cheap to quite expensive. The price you pay for furniture often also relates to the quality of it and its components. But inexpensive furniture does not equate to low-quality – especially with modern technology. Different manufacturing techniques and tools allow for the creation of high-quality furniture at a low cost. No longer is it needed to spend ludicrous amounts of money to furnish your living space adequately.