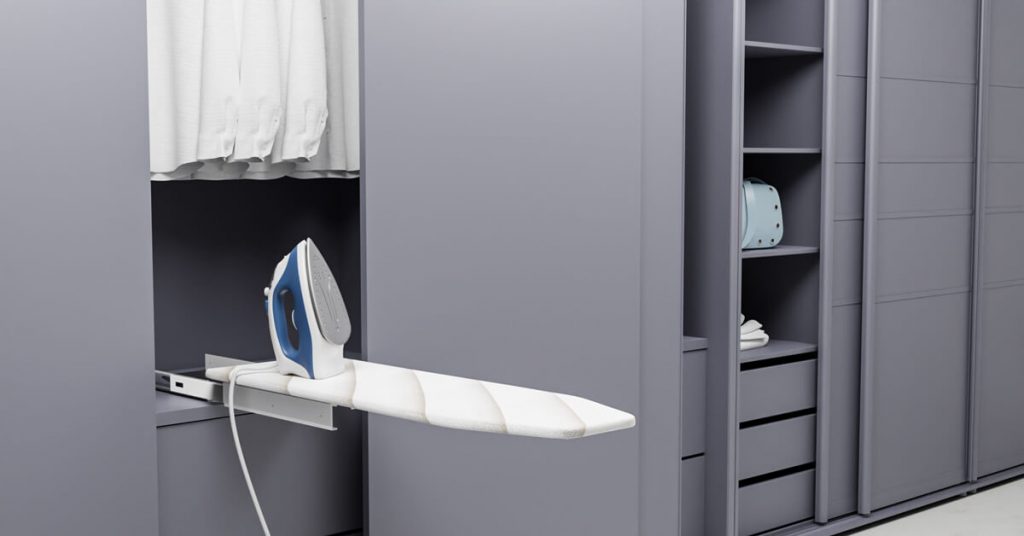 Here are some highly recommended ironing boards in the market which have revolutionized the chore, saved space, and allowed ease of movement for most users.

1.The free-standing ironing board

As mentioned in the introduction, the free-standing ironing board remains in some households because it can be folded up and transported to different parts of the house, a feature that is not allowed by a wall mounted ironing board. The free-standing board has legs of its own and can be folded up and taken to a different room, wherever it might be needed. This kind of board is usually stored inside a closet or behind a door. However, the user can feel its weight, and carrying it around may seem like a chore in itself.

2.The tabletop ironing board

This is similar to the free-standing ironing board, but it has shorter legs and can be placed on the bed or a large table. Unlike the X mechanism of the legs of the free-standing board, the tabletop ironing board has two short legs on both ends, which fold inward. This board is usually smaller, which is suitable for small spaces such as bachelor pads. Its small size requires less storage space, and it is much lighter than other kinds of boards.

This kind of board has a large hanger with hooks attached to it and can be stored behind doors or inside closet or cabinet doors. It has no legs; thus, it is less sturdy than a free-standing or tabletop ironing board. However, ease of storage makes it one of the household favorites. This product is most probably a precursor to the wall mounted ironing board.

This product can be laid on any surface and ironed on. Its texture is just like the cover on a regular ironing board, and it prevents heat from seeping in and affecting the surface underneath. It does not move around, offering more stability than a free-standing ironing board. After use, it can be rolled up or folded and stored along with the clothes.

Steam boards are upright boards where you hang your clothes against them, and the appliances release steam to remove creases and wrinkles. It is not highly recommended, but it remains a favorite because it is ergonomic and requires less effort to use.

6.Ironing board with case

This board is the smallest and is commonly used to iron small items such as handkerchiefs and baby clothes. It does not need to be folded up; instead, it is stored in a case to keep it safe from dust.

7.The Venace wall mounted ironing board

Venace Intelligent Technlogy Inc. has released several kinds of wall-mounted ironing boards, and this was the first appliance to come out. This wall mounted ironing board has no legs and is fixed on sturdy hinges attached firmly to a wall instead. It can be rotated 180 degrees and is double-folded for easy storage. It is ideal for homes and establishments with dedicated ironing rooms.

8.The Venace wall mounted fold down ironing board

This wall-mounted ironing board has a quick-release mechanism that allows it to be raised to a flat position, and the exact mechanism is used to fold it back when not in use.

9.The Venace pull out drawer built-in ironing board

As the name suggests, this ironing board is not wall mounted. Instead, it is placed on a series of slide rails cleverly hidden inside a drawer, which can easily be pulled out. Storing it is as easy as pushing the drawer closed.

10.The Venace folding pull out ironing board

This is similar to the pull-out drawer built-in ironing board, but this one is stored inside a closet. It operates on slide rails too, but it can be rotated 180 degrees and folded in half for lesser storage space.