To talk about the history of the ironing board, you absolutely can not leave the iron. Did you know that the Chinese started ironing clothes 2000 years ago?

The original iron was made of stone, pottery or copper and iron pieces baked on the fire and then pressed on the clothes to iron. According to legend, the invention of the iron predates the end of the Shang Dynasty(1600 B.C—1046 B.C), according to the “Huainan King”. The book notes: “Dou(iron), ironing also.”

The origin of the name iron is that its image is similar to the meaning of the Big Dipper, and the shape of the iron is like an ancient cooking utensil “bucket”. In ancient China, the iron is also known as the “fire bucket”, “gold bucket”,  its main function is to iron clothes, the effect of two: one is to have a wrinkled place ironed flat paste, as the Eastern Han Dynasty Xu Shen “Shuowen” said: “ironing, hold the fire to ironing the clothes also.”

But the earliest iron seen in kind is the Western Han Dynasty( 202 B.C— 8 A.C), the Han Dynasty iron, mostly cast in bronze, the appearance of a round belly, wide mouth edge, with a long handle, some long handle end is also decorated with a dragon pattern. Before ironing, the burning charcoal in the iron, the use of metal heat transfer and weight to iron out the wrinkles on the clothes or iron out the beautiful folds.

During the Sui Dynasties and Tang dynasties, the country was strong, the people were well off, and the silk weaving industry was very developed, so people had more leisure time to dress up. The poet Wang Jian’s poem “Palace Tunes” describes the situation of the Tang Dynasty palace maids staying up all night to iron the emperor’s clothes: “Every night, started ironing the imperial clothes when he went to sleep, and the fire was blazing in the dragon type iron made by silver. I listened to the king’s awareness in the tent, and I could not return until the sound of the bell.” 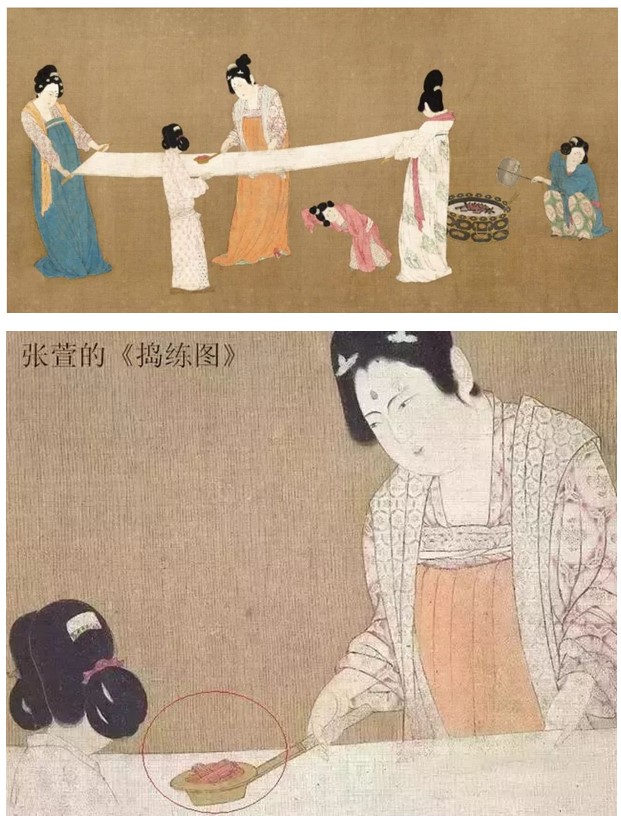 Although the Chinese began ironing clothes more than 2,000 years ago, there are few historical records of ironing boards, and we assume that they were ironed on a proprietary device, which is yet to be confirmed by archaeological findings

Glass Smoother and Whalebone Ironing Board

The earliest known ironing boards were used by the Vikings in the 9th century.

Whale meat, blubber, and bones were rare and valuable North Atlantic resources. The refined lady of the house who owned this item would have used it, along with the weight made of imported glass, to smooth her linen. Far from being the unkempt barbarians of popular imagination, Vikings were extremely fastidious for their time.

Later, in Europe, it became common for people to iron their clothes on the kitchen table, or on a flat piece of the board resting between two chairs.  This practice spread to North America and by the early 19th century there was plenty of advice in housekeeping books about what size an ironing table should be, what it should be made of, and what sort of blanket or cloth it should be covered with.
About the same time, several ironing boards started appearing on the market but there is some controversy over who actually invented the ironing board. Who invented the ironing board? That is a super question. 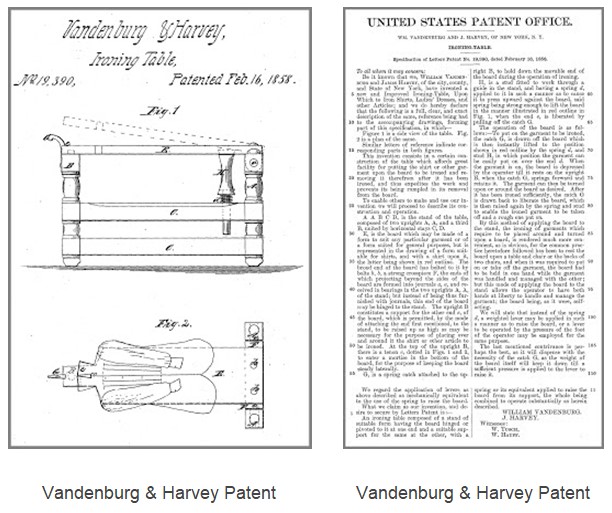 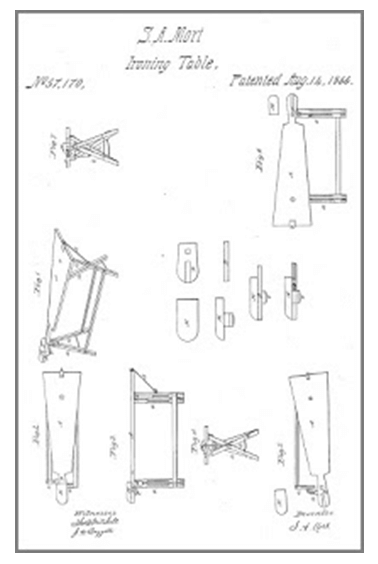 On the 16th of February 1858, W.Vandenburg and J.Harvey patented an ironing table that facilitated pressing sleeves and pant legs.

About three years later Isaac Ronnie Bord of Georgetown, Delaware, took out a patent for an adjustable flat horizontal surface for the pressing of undergarments, garments and bed linen.

Miss S A Mort obtained a patent for the first truly folding ironing board in 1866. The invention also included a removable pressboard used for sleeves. 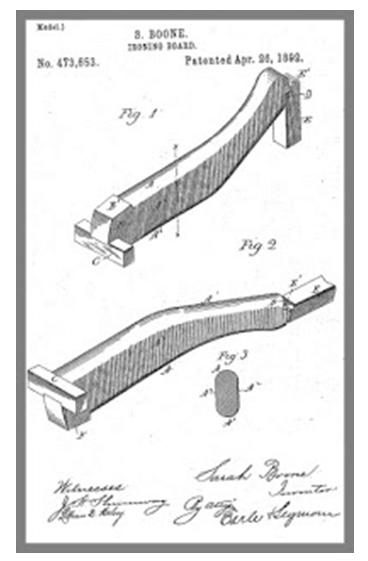 In 1892 the world’s most recognized ironing board inventor Sarah Boone obtained a patent in the United States for improvements to the ironing board, the forerunner of the modern folding ironing board with a narrow, curved shape, designed to make it easy to iron shirts. Please enjoy “Sarah Boone Ironing board” as shown in the picture:

In the 19th century, ironing boards were commonly used at home. 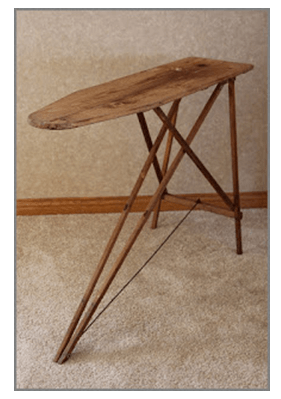 Manufacturers quickly caught on to the notion of offering ironing boards ready-made by the late nineteenth century. By about 1898, the ironing board came equipped with legs that could be taken down and enabled the board to be set up anywhere. These early manufactured ironing boards were of wood that was supposed to resist warping although they still warped.

This wooden ironing board was made by S. J. Bailey, Inc. in Peru, Indiana, for Sears Roebuck & Co.

New improvements arrived with the use of iron and soon ironing boards had metal-top boards. However, despite painting, the tables still buckled under the heat of the iron. The J. R. Clark Company of Minneapolis began using a mesh that permitted steam to escape and prevent buckling and rusting.

Modern ironing board begins to take shape in 1940

By 1940, all-metal collapsible ironing boards with tubular legs became common. The basic design of the home ironing board has changed little since then.

Orbit’s ironing board has won the 2012 Australian International Design Awards. The Hills Orbit ironing board. According to the Hills website,  the new ironing board is full of world-first innovations, the Orbit takes the hassle out of housework.

Remarkably similar in construction to the 1940 (72-year-old ironing board) model wouldn’t you say? Although to be fair, there are some nifty ideas and obviously, the designers have gone to great lengths to incorporate many innovative features not found on the average domestic ironing table.

Now, we don’t need to argue about who invented the ironing board, it is clear that it has had an impact on our modern life across the centuries. 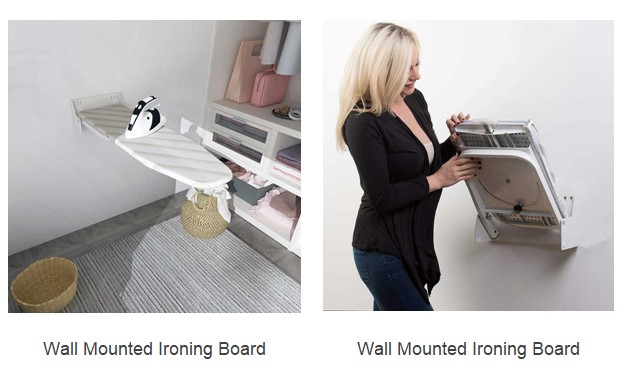 The Venace’s ironing board can be mounted on the wall, rotates 180° horizontally, and is suitable for ironing at any angle. It is retractable for the store and weighs only 11 kg.